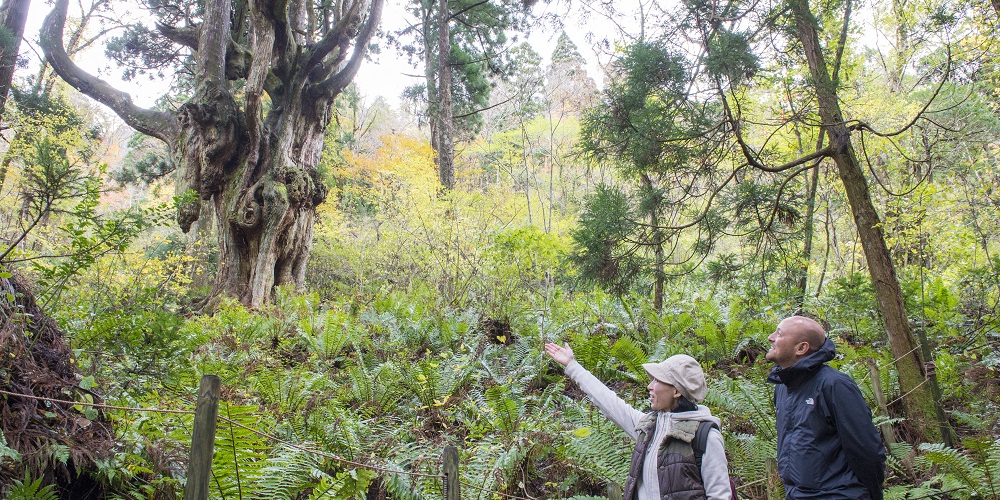 The Oki Islands – A Geological Paradise

Hi, I’m Tom Miyagawa Coulton and I live on the small island of Osaki Shimojima in Hiroshima Prefecture. I’m traveling around the San’in region and along the Sea of Japan coastline from Tottori down to the tip of Shimane. I’ll be writing about my journeys in these travel reports. I hope you enjoy them!

Mount Akahageyama and the Red Cliff 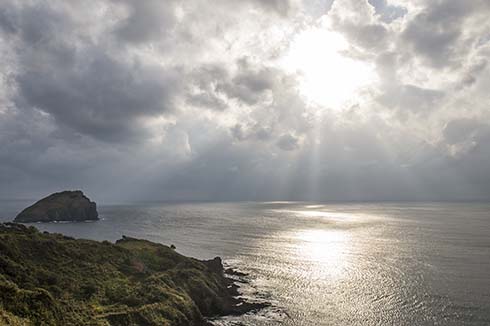 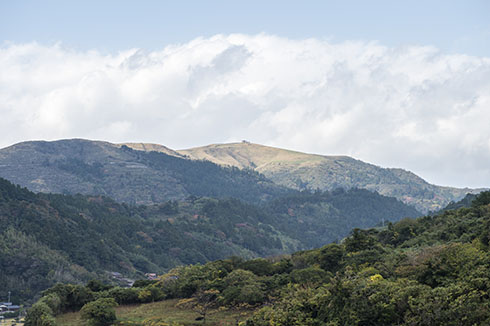 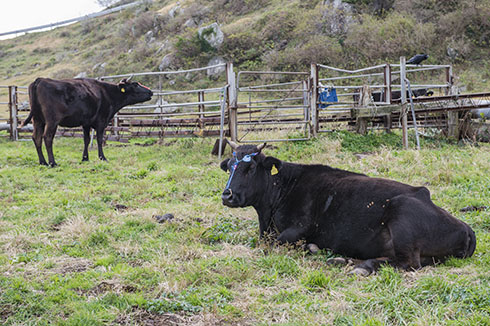 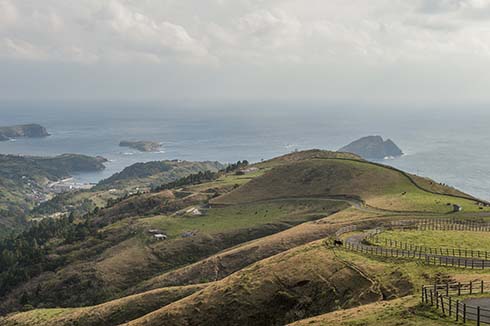 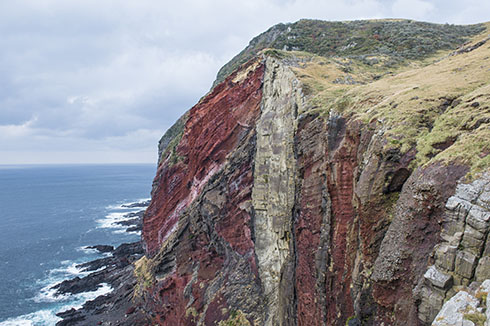 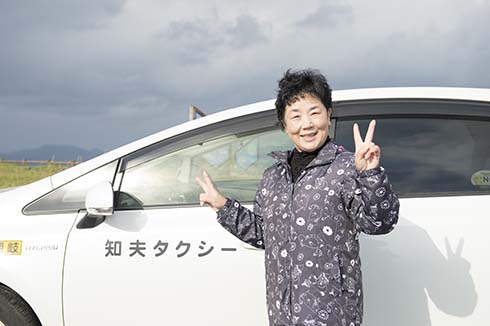 As soon as you set foot onto Chiburijima you notice the difference. The fresh sea air, the relaxed pace of life, the tranquility of island life. It was a stark contrast to the bustling cities and tourist sites on the mainland.
I arranged to see the sights of Chiburijima with my taxi guide Michiko Nakano. She wasn’t hard to spot at the ferry port. She runs Chibu Taxis with her husband – the only taxi firm on the island catering to a population of just 600.
The Oki Islands lie roughly 50 km north of the mainland in the middle of the fertile but often tempestuous Sea of Japan. It comprises four islands; Chiburijima Island, Nishinoshima Island, Nakanoshima Island and the largest, Okinoshima on Dogo Island.
We made our way to Mount Akahageyama – a popular sightseeing spot on the Chiburijima and the highest point on the island. With herds of cows grazing on grassy fields, the landscape looked more European than Japanese. Chiburijima is famous for rearing calves and selling them to famous beef producing regions such as Kobe and Matsuzaka.
The name ‘Akahage’ means ‘red and bald’ referring to the summit devoid of trees and showing glimpses of the island’s red topsoil. The panoramic view from the observatory was breath-taking.

A few kilometers downhill was the famous Red Cliff. This geological phenomenon is an exposed cliff-face showing clearly the huge volcanic activity that created this landscape.
Although the archipelago is a haven of peacefulness, its origins are anything but. It was formed roughly 6.4 million years ago from violent volcanic eruptions. A glance at a map will reveal the western islands form an enormous submerged caldera. The Oki Islands with its geological history, eco-systems and human traditions led it to be designated as a UNESCO Global Geopark in 2015.
The Red Cliff is probably the finest showcase for this Geopark. It was easy to see the immense power and scale of the volcanic activity that formed these islands. The different strata of rocks catapulted out of the earth were clearly visible. A word of warning, there are no barriers at the edge of the Red Cliff and it’s a long way down, so be careful! 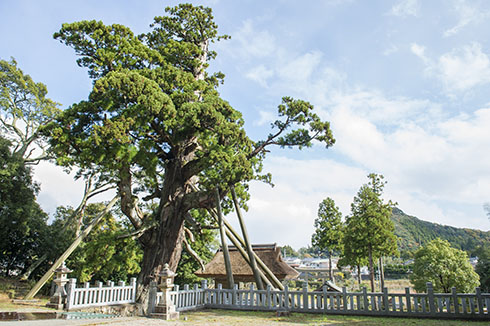 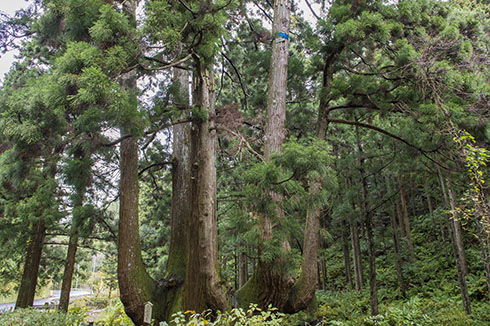 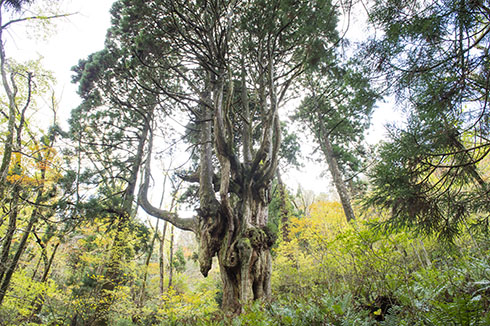 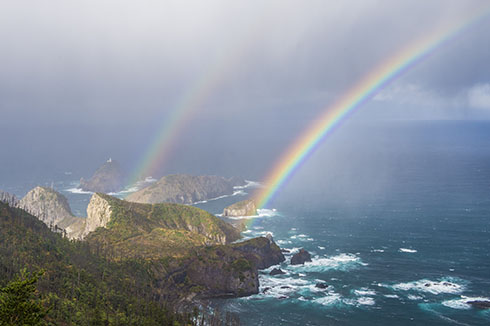 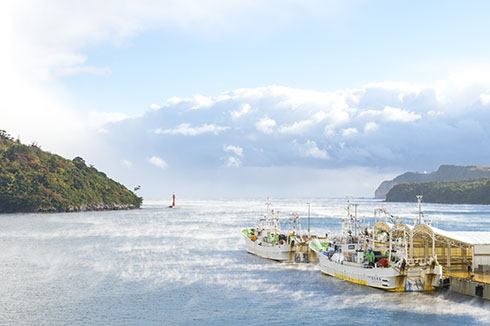 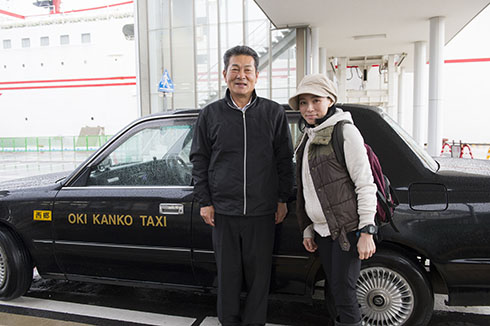 So much of Okinoshima on Dogo Island feels ancient. The rock formations, virgin forests and dramatic coastlines on this island – the largest in the archipelago – leave you in awe. Some of the oldest residents have been quietly existing on Dogo for centuries. These are the venerable Japanese cedars. With my tour guide-interpreter Reiko Aoyama and our taxi guide Murakami-san from Oki Sightseeing Taxis we set off to see three of the oldest cedars in Okinoshima.
The first cedar on our journey was growing in the entrance of Tamawakasu-mikoto Shrine. The 2,000-year-old “Yao-sugi” is a colossus. Rising to a height of 30m, the ancient cedar is supported by a heavy set of beams that keep the old Goliath upright. The Tamawakasu-mikoto Shrine was beautiful in its own right. We arrived during renovations when main shrine building had been fitted with a handsome new straw roof.
The next cedar on our journey was the 600 year-old “Kabura-sugi”. It was growing near the side of Prefectural Road 316 heading north through the mountains. Similar to other ancient cedars, a collection of trunks grew out of the base like fingers reaching up to the sky. This was the tallest of the cedars we would visit, reaching a height of 42m.
We continued onto the Chichi-Sugi Cedar tree of Iwakura – our main objective. Thought to be 800 years old, it grows on Mount Daimanji – the highest mountain on the island. The contorted branches of this beautiful living monument weaved their way skywards and contrasted with the younger stick-like cedars close by. Reiko explained the details of this ancient life form, including the origins of its unusual name ‘Chichi’ meaning ‘breast’. It was given to the tree because of its curious drooping outgrowths.

Before we drove back to Saigo Port, Murakami-san took us to Shirashima Observation Deck on the north of the island. I was apprehensive about walking up to the observation deck in the strong wind and the rain, but we ventured on regardless. Lucky we did. As we reached the deck, there was a sudden change in the weather and beams of sunlight broke through the clouds. In that instant, a pristine double rainbow materialized in front of us. As quickly as it came, it disappeared again into a blanket of heavy rain, but it was enough to leave us speechless.
As I boarded the ferry and prepared for the journey across to the mainland, I peered out of the window. As I gazed out, bright sunshine flooded into the harbor breaking up the haze of the rainclouds. I don’t know if it was the sunlight, the drop in temperature, or the rain, but suddenly wisps of mist and fog danced across the surface of the water in the harbor. It looked like we were setting sail on a sea of clouds.
The other passengers didn’t bat an eyelid. I guess it comes with the territory when you live on a natural geological paradise.

When you visit the Chichi-Sugi Cedar tree of Iwakura, please stay behind the rope. It’s there to protect the tree.

Although the journey out to the islands is not a short one, what awaits you at the other end of the ferry ride makes it truly worth the effort. It was a privilege to witness this geological paradise and this short trip has left me yearning to go back. Maybe next time in slightly warmer weather. (Visited in November 2017)