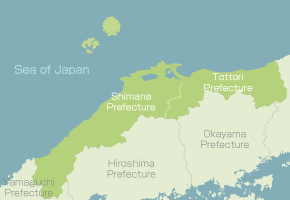 This is a trip that will take you around historical and cultural treasures you can only find in the San'in area. Iwami Ginzan Silver Mine was the first site to be listed as a World Heritage Site for its industrial heritage. Matsue Castle is a national treasure and has one of only 12 remaining castle towers in Japan. Tatara in Okuizumo is a time-honored iron making technique in Japan that has been recognized as Japanese heritage. Mt. Mitoku features the most dangerous national treasure to see in Japan. Mt. Daisen once flourished as the largest cattle and horse market in Japan. 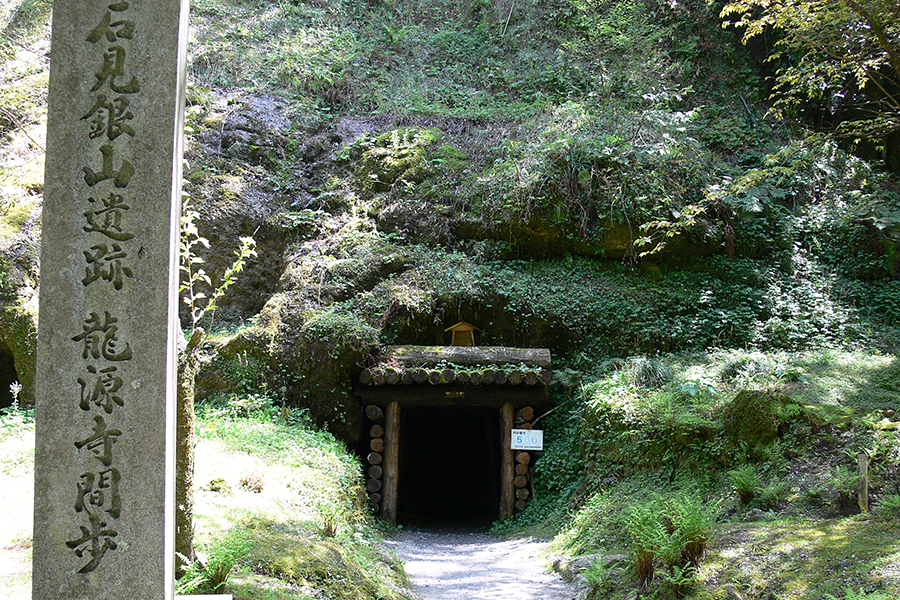 The remains of this silver mine were listed as a World Heritage Site in 2007. A large amount of silver was mined in the world in the 16th and 17th centuries. Japanese silver accounted for about one third of the total silver produced. A considerable part of this is believed to have been output from Iwami Ginzan Silver Mine. Ryugenjimabu is the only horizontal tunnel (mine tunnel entrance) where silver ore was mined to be open to the public. You will be introduced to the full picture of Iwami Ginan Silver Mine with a wealth of materials and dioramas in the World Heritage Center. The Kumagai Family Residence is the most prominent mercantile house that flourished with Iwami Ginzan Mine. 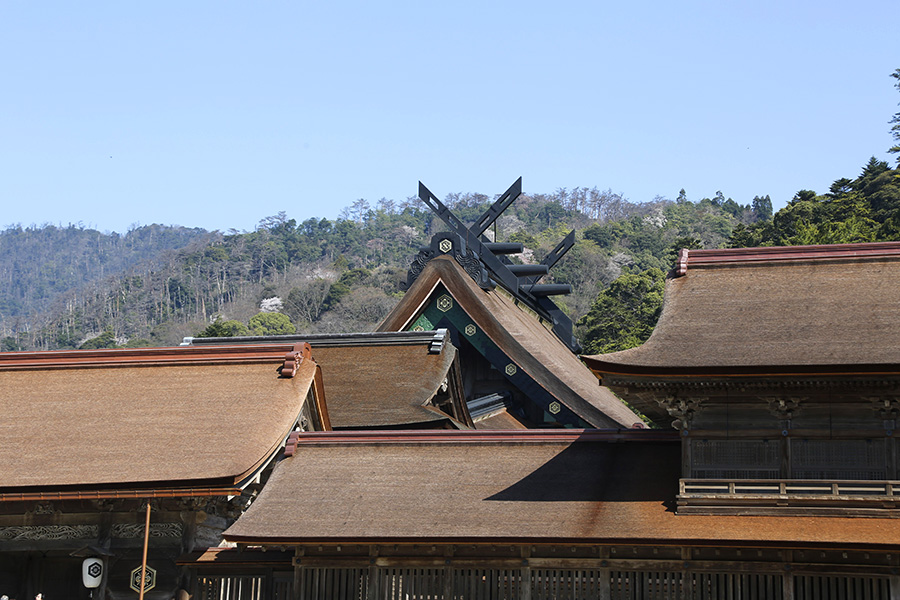 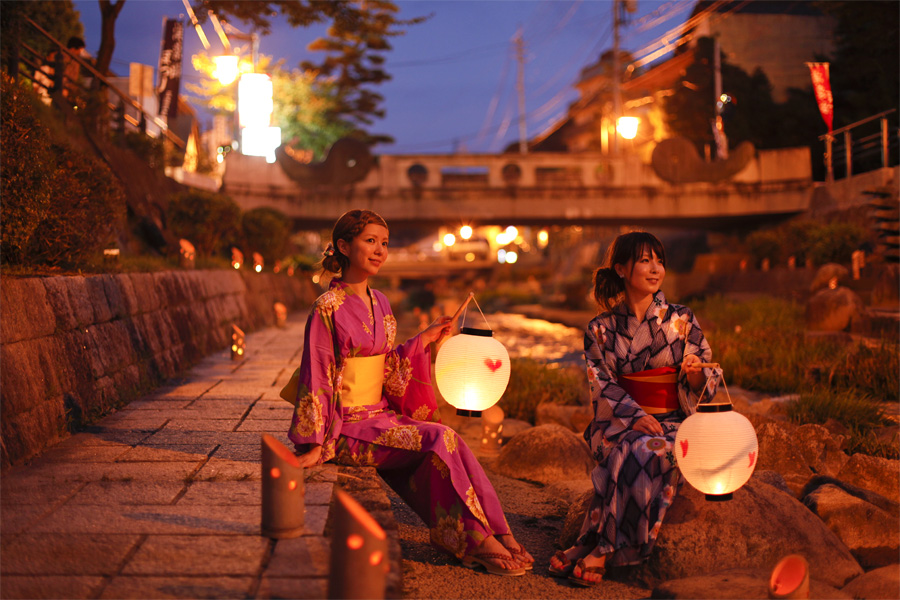 Tamatsukuri Hot Spring is known as one of the oldest hot springs in Japan. The hot water from Tamatsukuri is called “hot water of god” because of its fantastic effects. The hot spring water quality has an especially strong beautiful skin effect. This has made it very popular with women and led to it becoming known as a hot spring for beautiful skin. You will find footbaths, hot spring cosmetic shops, Tamatsukuri Art Box and cafes along the Tamayu River that flows through the hot spring district. In addition, there are many spots connected to marriage and the gods here. These include Tamatsukuriyu Shrine that is popular as a power spot with a wishing stone, Koi Kanai Bridge (Bridge Where You Can Find Love), Kira-Kira Bridge and the Kamisama-no Ouchi (Home of the Gods). 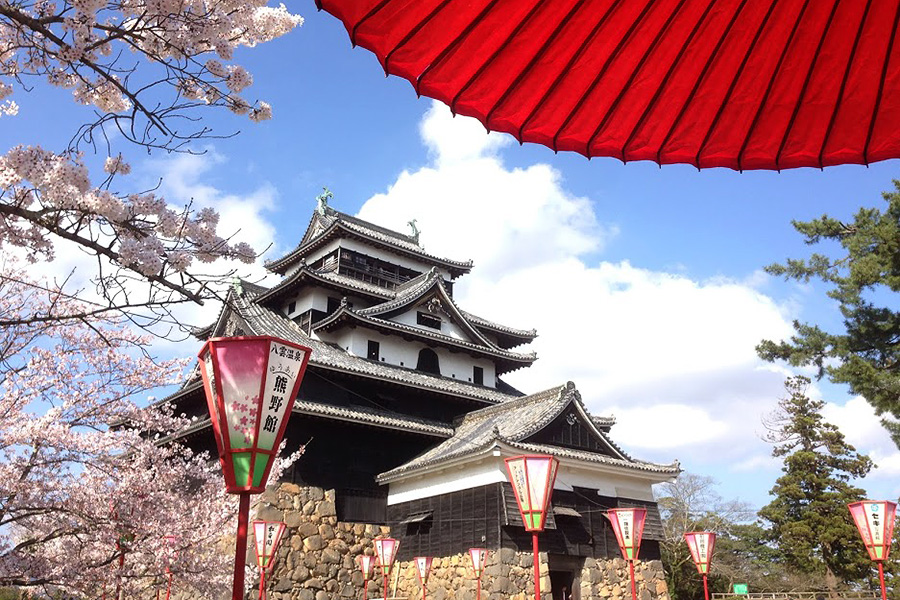 This castle was completed in 1611 by Horio Yoshiharu – the founder of Matsue. This is also called “Chidori Castle (Plover Castle)” in contrast to the name of “Shirasagi Castle (White Heron Castle)” for Himeji Castle. The castle is characterized by an unaffected and combat-ready structure in the Momoyama style. This is one of 12 castle towers still existing in Japan. This was listed as a national treasure in 2015. You can see out in all four directions to the streets of Matsue City and Lake Shinji from the top floor of the castle tower. Vestiges of the Edo period (1603 to 1868), such as samurai residences, remain in the area around Matsue Castle. You can take in the atmosphere of the castle town from a pleasure boat that goes around the moat. 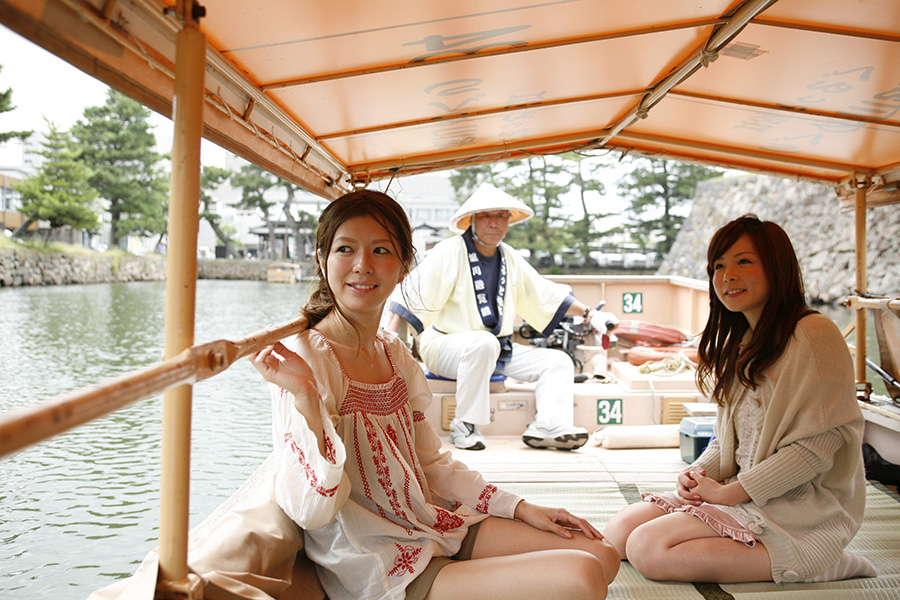 Trip by boat on a canal around a castle town

This is a trip on a pleasure boat around the canal of the castle town of Matsue. 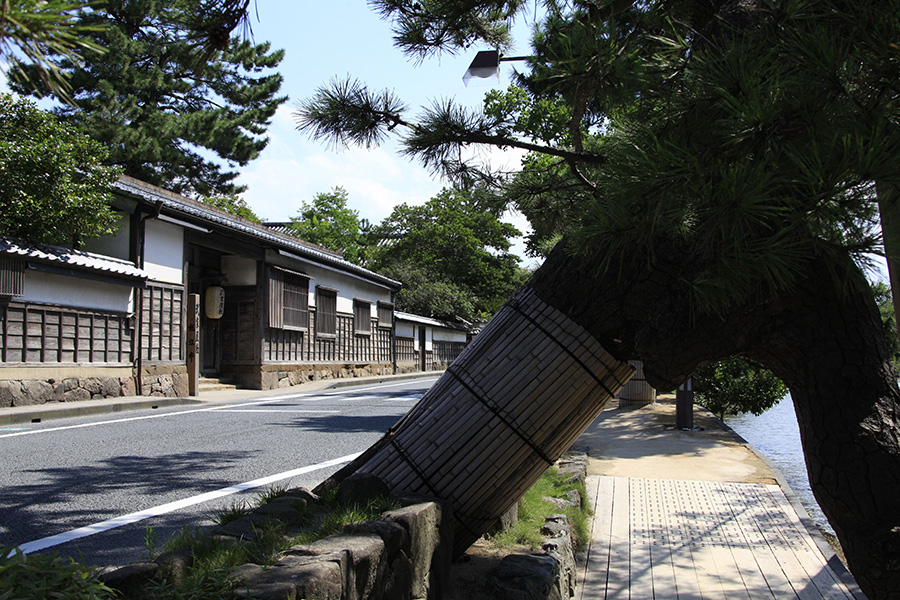 Visit 400 years of history in the castle town of Matsue

You will find the historic townscape of the castle town of Matsue remaining in Shiomi-Nawate. You can catch a glimpse of the lives of samurai in the Edo Period (1603 to 1868) by visiting a samurai residence. 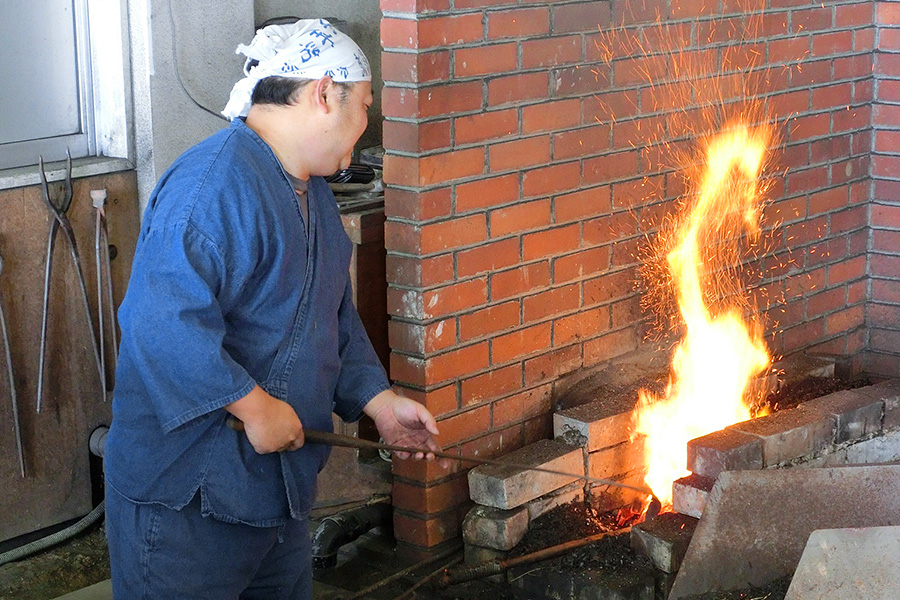 This hall features exhibits on the history of tatara iron making since the early modern times, the revived old furnace and Japanese swords made using tamahagane (steel made from iron sand). The Society for the Preservation of Japanese Art Swords is the only organization in Japan to have inherited the ancient Japanese tatara iron making techniques to produce tamahagane that is the raw material for Japanese swords. The Society for the Preservation of Japanese Art Swords revived the furnace in 1977. In addition, you can see Japanese sword tempering performances by the swordsmith Kobayashi who continues to make swords in the local Okuizumo Town. (Sword tempering performance: Second Sunday and fourth Saturday of every month) Adachi Museum of Art is home to many attractive works. These include a collection of modern Japanese paintings by Yokoyama Taikan, Takeuchi Seiho, Hashimoto Kansetsu, Uemura Shoen and others. There are also contemporary Japanese painting collections and pottery collections by Kitaoji Rosanjin and others. Above all, the Yokoyama Taikan collection is the greatest in Japan in terms of quality and quantity with 120 of his works. The large Japanese garden here is also popular. This is chosen every year as the best garden in Japan in a ranking by an American specialist journal. This garden has also won the only highest three-star rating in the San’in area in the Le Guide Vert Japon Michelin. 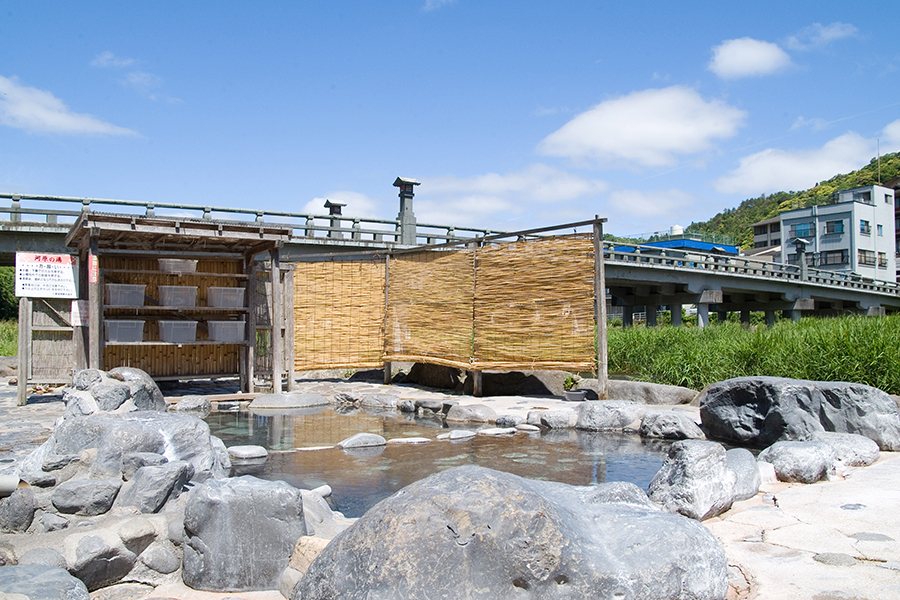 Nashi-no Hana Hot Spring Village is comprised of four hot springs: Misasa Hot Spring, which is located at the foot of Mt. Mitoku and is one of the world’s leading radon hot springs; Hawai Hot Spring and Togo Hot Spring, which are located on the shore of Lake Togo – one of eight picturesque sights in the San’in area; and Sekigane Hot Spring, which is known as a hot spring of beautiful skin. These are the leading hot springs in the central part of Tottori Prefecture. There are many other highlights in this region. These include the Japanese heritage Mt. Mitoku, the White Wall Storehouses, Detective Conan Avenue and Encho-en – a Chinese-style garden. 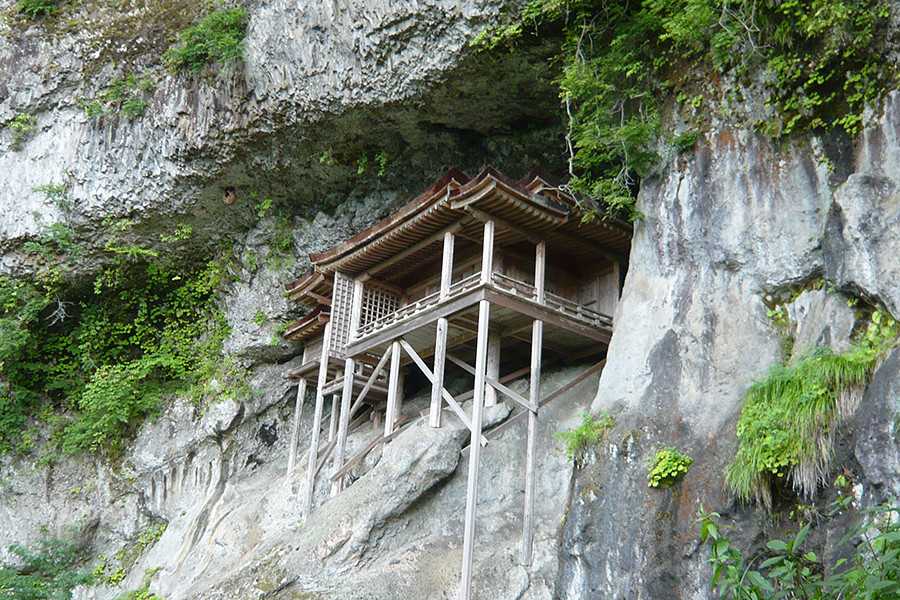 Most Dangerous National Treasure to See in Japan

This is a mountain temple with grounds on Mt. Mitoku at an altitude of 900 meters. There is a legend that Nageire Hall (the inner temple) was thrown down the mountain by En no Gyoja – the founder of Shugendo (Japanese mountain asceticism). This is a building unlike any other that has been built in a hollow on a steep precipice at a vertical. This has led to the building being listed as a national treasure. In addition, this temple was also listed as Japanese heritage together with Misasa Hot Spring as the “most dangerous national treasure to see in Japan and one of the world’s leading radon hot springs” in 2015. This is also an excellent building in terms of architectural beauty with a gently curved roof and a structure of pillars that support the hall. 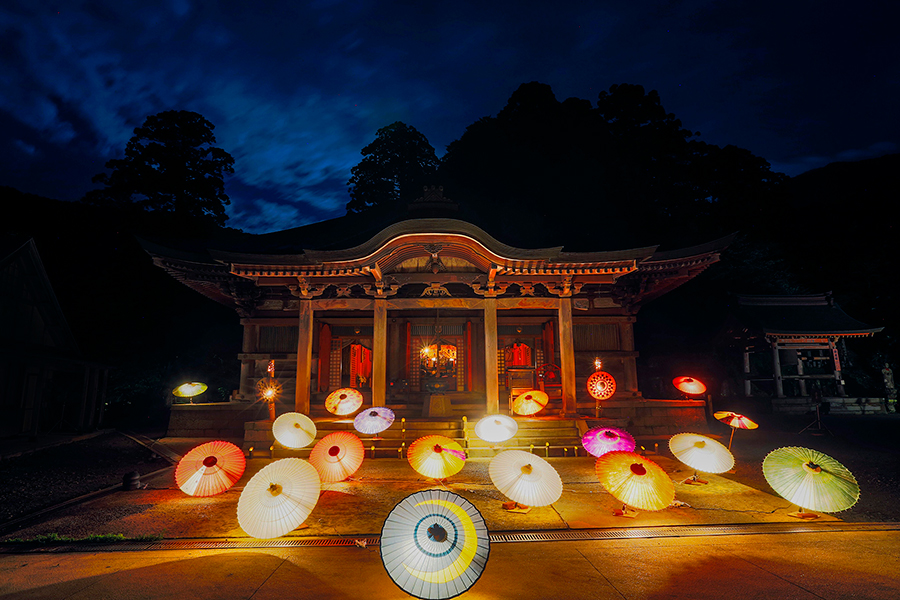 Daisen Temple is an ancient temple in the Tendai sect located on Mt. Daisen. This area enjoyed great prosperity to rival that of Mt. Hiei or Mt. Koya as a large training dojo since the Heian period (794 to 1185). You can see precious Buddhist art from the Hakuho period (approx. 645 to 710) and Kamakura period (1185 to 1333) in the Reho-kaku Treasure Hall. If you go up the stone-paved approach road from Daisen Temple, you will come to Ogamiyama Shrine. This is one of the grandest gongendzukuri (style of Shinto Architecture in which the main hall and worship hall share one roof) shrines in Japan. The area at the foot of Mt. Daisen centered on Daisen Temple was listed as Japanese heritage as “one of Japan’s largest horse and cattle markets developed by the Ksitigarbha faith” in 2016.