All About San’in | San’in Tourism Organization

HOME > All About San’in

Route Romantique San’in stretches from Tottori Prefecture and Shimane Prefecture to Hagi City in Yamaguchi Prefecture. This region, which faces the Sea of Japan with the Chugoku Mountains in the background, possesses abundant nature and the oldest history in Japan. Culture and life infused with romantic myths still continue to survive to this day in this region. You will find an authentic Japan here that has been in existence since ancient times. Encounters that will lead you to make wonderful connections wait for you here in these 12 attractive areas. 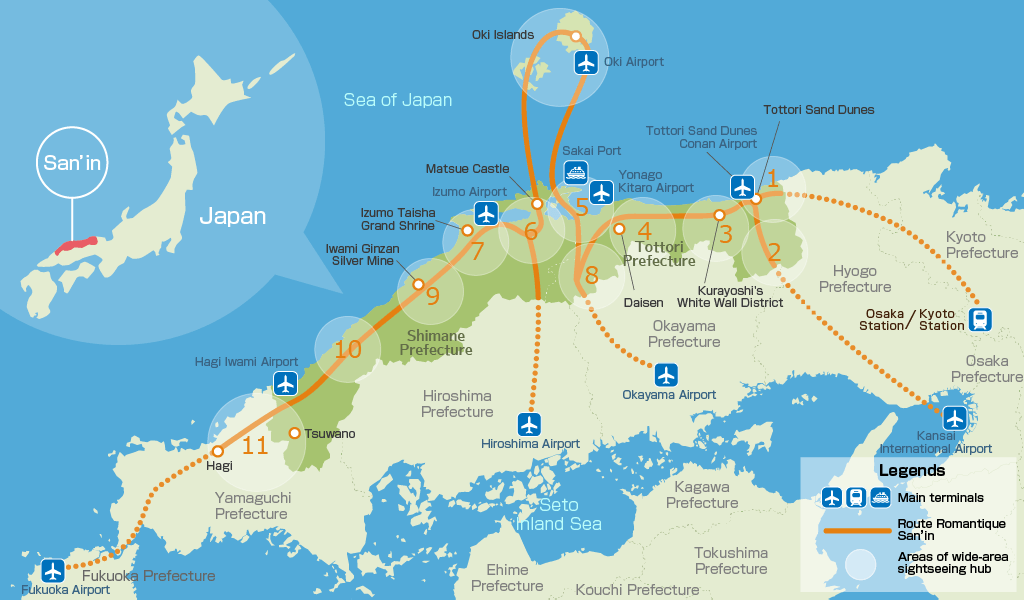 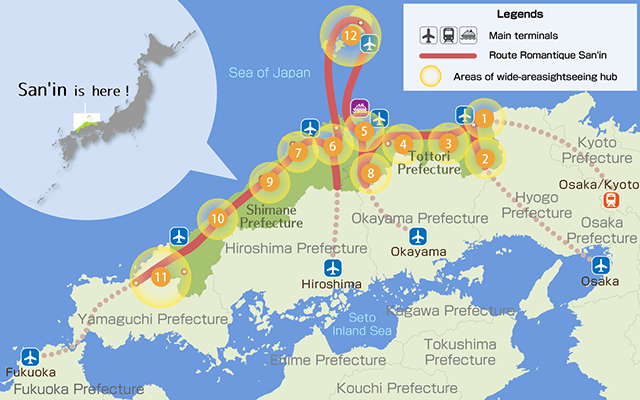 *Click on the area to jump to each detail page. 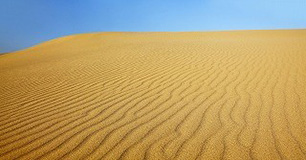 Sand Dunes, Geopark and the Hare of Inaba Myth

This area is at the eastern tip of Tottori Prefecture where the land has been given color by the Hare of Inaba myth. This is also where the San’in Kaigan UNESCO Global Geopark is located with great nature such as the Tottori Sand Dunes (the largest sand dunes in Japan) and Uradome Coast. You will find a great many tourist attractions here. These include Tottori Sand Dunes Conan Airport that is unusual in the world because it takes its name from a manga story. 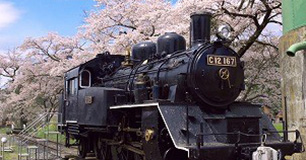 Retro Appearance of an Inn Town and Steam Locomotive

This is an area where you can still find a rural landscape, nature and vestiges of an inn town distinctive to Japan. Mt. Hyono attracts visitors from Kyoto, Osaka and Kobe looking for a nearby mountain climbing and skiing spot. In addition, the Wakasa Railway is prized for its historical and cultural value. 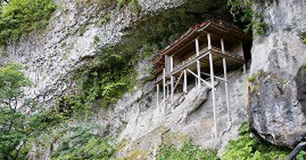 The Most Dangerous National Treasure to See in Japan, Hot Springs and Detective Conan

There is plenty to see and do in this area. There is the Japanese heritage Mt. Mitoku and Misasa Hot Spring, Kurayoshi where you can enjoy a stroll around this town with its white-walled storehouses, and Gosho Aoyama Manga Factory and Detective Conan Street that are connected to Detective Conan. 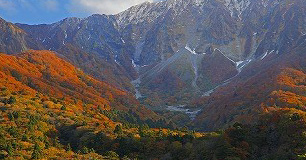 Majestic Sports Resort and the Largest Hot Spring in San’in

The national park of Mt. Daisen is the highest peak in the Chugoku region and was selected as one of the three best mountains in Japan. This is a large resort where you can enjoy sports such as mountain climbing, skiing and touring. In addition, you can also relax your mind and body in Kaike Hot Spring – the largest hot spring in San’in that overlooks the Sea of Japan. 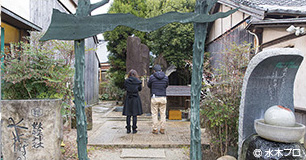 Town of GeGeGe no Kitaro and Fish

Sakaiminato is famous as one of Japan’s leading fishing ports for catching Matsuba crab – the king of taste in San’in in winter – and tuna. In addition, this area is also popular as the hometown of Shigeru Mizuki, the author of GeGeGe no Kitaro, that is lined with bronze statues of spirits. Mihonoseki is a town with myths and the history of kitamaebune (cargo ships that sailed the Sea of Japan during the Edo period (1603 to 1868)). 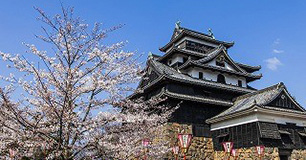 You can still find the charms of a castle town and the culture of the tea ceremony/Japanese confectionary in Matsue – the city of water with a beautiful setting sun over Lake Shinji. This is an area with power spots (e.g. Yaegaki Shrine) and a wealth of tourist attractions (e.g. Adachi Museum of Art with Japan’s best garden). 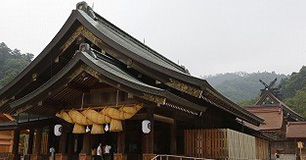 Sacred Place for Marriage Where Gods from All Over Japan Gather

This is an area where the history and culture that offers a vivid reminder of ancient Izumo still lives. This starts with Izumo Taisha Grand Shrine that is famous across Japan for the god of marriage. You will find a wealth of local foods here. These include Izumo soba noodles and Izumo zenzai (red bean soup). 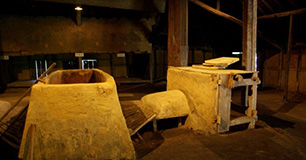 This area that spans Tottori and Shimane is infused with the myths and legends of iron. This is an area where you can experience the symbiosis between people and nature, as well as the spirit of Japan. There are spots here that attract attention for tatara (iron making furnace) that is recognized as Japanese heritage.

Iwami Ginzan Silver Mine is Japan’s largest silver mine that has produced a large amount of silver distributed throughout the world. This mine is seen in a positive light because it has been developed with little burden on the environment. This has seen it listed as a World Heritage Site. In addition to the entrance to the mine tunnel, the Omori area shows people now what the townscape was like at that time. This townscape that is lined with old private house cafes is popular. 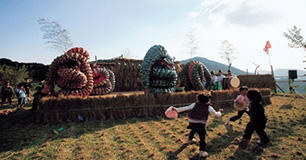 Iwami kagura (ancient Shinto music and dancing) that stirs the passions of everyone from young to old thrives in this area. In addition, this is an area where you can still find historic sites that have an affinity with Kakinomoto no Hitomaro – a poet in the Manyoshu (8th century anthology of Japanese poetry). The fatty horse mackerel and nodoguro (blackthroat seaperch) are popular. 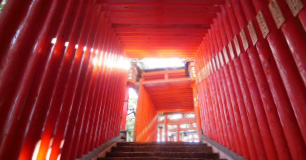 Townscapes of the Japanese Heritage Tsuwano and the World Heritage Hagi

Tsuwano is called the “little Kyoto” of San’in. This is a town with Japanese heritage where you can experience a castle town from the Edo period (1603 to 1868) that is depicted in Tsuwano Hyakkeizu (One Hundred Views of Tsuwano). Hagi is a place that has a close affinity with patriotic samurai in the closing days of the Tokugawa shogunate (e.g. Yoshida Shoin). This is a World Heritage town connected to the industrial revolution in Japan. 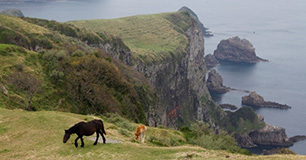 The Oki Islands, located in the Sea of Japan, are infused with majestic nature and have been certified as a UNESCO Global Geopark. The area is represented by such features as the Kuniga Coast and Rosoku-jima (Candle Island), as well as interesting history of emperor exile.